why garments workers are loosing their job? - Textile Student Skip to content

why garments workers are loosing their job? 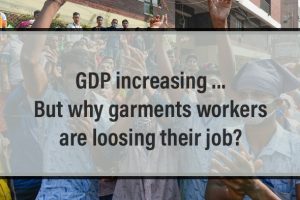 Bangladesh performing very well in GDP growth for past decade. Where they mostly depends on garments manufacturing sector. It’s contributed 85% of Bangladesh’s economy statistics has released by government.

The giant business country USA and China has been fight together for last few month. For the sake of Huawei and national security issue in USA, as per Donald trump’s public speech. Bangladesh and those country in Asia took the chance to booming it economy. Bangladesh successfully achieved that opportunities.

Thus; Bangladesh should be more beneficial for manufacturing company along with its workers. But recently “more than 25000 of garments workers losses their job and 40 factories has shutdown” non-government organization says. This country is well known for cheap price & good quality of products. Because labor cost was as low as 5,300/= BDT approximately ($62.7397). December last year the government take a vital decision to grant workers demand to increased minimum wages to 8,000/= BDT approximately ($94.6952 ).

There are too many small factories who was doing business by sub-contract in challenging working environment with low cost workers. Those people makes small company who has a little garments knowledge. After implementing the minimum wage law; they faces horrible situation and force to shutdown the factory. Because they are unable to provide government approved minimum wage. This is how the small business owners unable to continue the business. So thousand of workers had lost their job and come out to the street for protesting and demand for job.

The neighbor country India, who was world’s 5th largest economy in last year. But now it has dropped by 7th position . Their workers losses the job more rapidly than Bangladesh. India experiencing financial crisis.

so not only garments sector but also each and every sector is going down on growth statistics. Automobiles sector had a huge shocked as low as last 45 years and losing lakhs of job. India slipped to 103 from 100 in global hunger index in about 119 countries. Experts says this GDP slowdown causes demonetization, GST, and many more wrong decision taken by current government.

On the other hand, the giant business companies in Bangladesh performed much better with this such environment. An Executive of cutting department in a factory located in Gazipur, named Mr. Abdul Kalam says to textile student that “most of the company holds the increment of office stuff due to increment of workers to balance company’s expenses for several month. Even the festival bonus didn’t paid at all in last few occasions.

Mr. Abdul Kalam express the happiness after know that GDP growth of Bangladesh. He prays to Allah for more success for his company and country.