Bangladesh has topped by GDP growth. 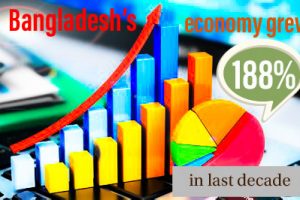 Gross domestic product ( GDP ) is Most usages measuring criteria of a country’s economy. According to the recently released “Spectator Index-2019”. Bangladesh has topped in the list of growth rate, from 2009 to 2019. The growth success based on various internal matters like pertaining to politics, economics, history, military affairs, sports, over growing science and technology.

Bangladesh booming its economy rapidy last decade. basically based on ready made garments (RMG) sector. where its gets more than 85% contributions. This sector performed very well in recent years and currently; US-China trade war by getting many more extra production order. Infrastructure of garments manufacturing factory in Bangladesh, has improved a lot. After several historical unexpected accident like Rana plaza collapsed and horrible Fire incident of Tazreen factory.

Last year the government of Bangladesh has increased the minimum wage from 8,000/= BDT per month (Approximately $94.8494 USD).

World Bank has released the statistics of last financial year. where the economy size was about $274B dollar, instead it was $102B dollar in the year of 2009. The GDP (nominal) size surpassed the $314.656B mark in June and per capital $1,888 showed by government’s figures.

Past decade the GDP growth are following.

Bangladesh is now the 29th largest economy in the world. As per the latest GDP ranking based on purchasing power parity (PPP) published by the International Monetary Fund.