How to handle no job depression? 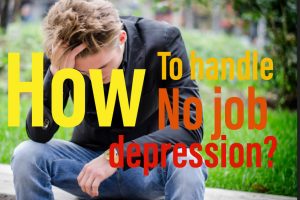 Finding a job with no experience is a challenging task, as most of the job seeker think in this days. My question is don’t you know the people are working in leading position today? Who was like you, looking for job a certain time in their life. I agree; it’s a little difficult to get a job in saturated market place. But it’s not impossible and not even that much hard as you think. Some people make it complicated.

Let me tell you a story

Once a rich man saw a man almost frozen in coldness beside his castle. He walk towards him and ask how could you survive in such weather condition? And why don’t you get some worm cloths? I can’t afford to buy any worm cloths as per my low income, replied the poor man.

Rich man told him to wait their until he come back with some worm cloths. He go into the castle and got busy with servant and completely forget about that poor man. Next day morning he find him dead at the place where he suppose to wait for him.
The moral concept of this story is “the poor man adjust himself to survive in the weather condition without any worm cloths. When somebody assure him for worm cloths; he stopped fighting to survive and wait for worm cloths. And finally he died by frozen.

A person assure you that he/she will arrange a job for you. So you do the same things like the poor man. stopped fighting in job hunting and got nothing by the end of the day. It’s happens Most of the time.

A man must call you for interview if the organization need a person like you. What ever it’s by reference or from any job portal. So you have to fight until get the job.

in my personal life; I got rejection without any valid reason when ever all of my interview, salary and formalities has done. I should’ve mention that I was over qualified for that position. This is the reason, COO of the company told me. Later on; I got job in the same organization in different department and amazingly double of salary. This is reality; you must accept that.

The intention of that story to tell you that some people in our society play the role like the rich man. On the other hand the poor man is you who looking for job. They show you that they are trying a lot to help you. But result? possibly nothing!

As far as I realize that most of the time they offer you the good food. You can’t eat, like the moral story of egret and fox. Such people kept remind you that you don’t have any experience. They offer you such job which required experience.

Let’s go through another story

that could help you to be Patience. Once a man jump in the ocean from a ship with any life boat. Because there is no life boat at all and the ship is sinking. Where he can go middle of the ocean without any boat and food? He was trying and trying to keep him alive with support of a piece of wood and hope.

It was night time and covered by darkness. He find a tiny island next morning to survive. Though that is a tiny island but it’s gave him shelter, food and water. He climb up to the peak of mountain looking for any ship. But unable to find any.

Finally he got the conclusion that this area is abandoned for ships. No big ships go through this way. Depth of the ocean isn’t good enough for any ships that’s why his ships was sunk.

He prepare him self to keep him alive and find a cave for shelter in night. Though that island isn’t a summer resort but he find the way to survive. Every day he climb up to the peak of mountain looking for any ship. But as far as he can see; nothing but water!

Now he hunt wild animal and roast in campfire which he made by stone’s. This Fire keeps him worm in night times when the temperature fall down. So he always keep it alive all the time what ever its day or night.

He knows the island very well and he has almost everything to keep him alive. But now he has losted the hope to go back to civilized society. So he doesn’t climb up to the peak of the mountain to looking for ships.

One day he goes to jungle for hunting and saw some smoke rising to the sky exact same direction of his shelter. He came back to the cave and see everything has gutted by his campfire. He lost everything which he gather himself for survival.

What you’ve done to me Allah? How would I survive any more in this island? This is how he crying and questioning to Allah.

How someting turn into unexpected?

He feels sleepy and slept on sand beside his gutted shelter. Dreaming that a ship has came and taking him back to the civilized society.

But he couldn’t reach the shore of any country. He wake up by some unusual sound like the horn of ship. He stand up and searching the source of the sound. A small ship is coming toward him and making that horn.

He for got excited and being so happy. He prays to Allah! Couldn’t believe it at all. The ship anchoring far away and a boat comes to the island to take him.

The first question he asked to the rescuer, how did you find me? The man replied it’s you who makes smoke signal and help us to find you.

What did you learn from this story? Never lose your hope and keep faith in Allah. Because “Allah is great planner”. Allah planes for everyone including mine and yours.

My suggestion for no job depression.

is; don’t be hopeless, be brave & patience. Try to get a job before it’s too late, grab something like the wood pieces or tiny island. what ever it’s less that particular area.