Sinking economy of India & and behind the scenes 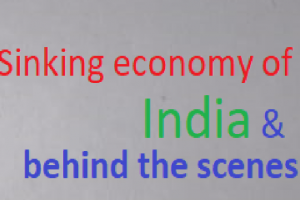 Word economy has lost its balance due to Covid-19 pandemic since 2019. Largest economy in the world has come to their knees and struggling to retrieve its previous position. Most of the underdevelopment country in Asia has the same undeniable situation. India is one of those country locate in South Asia who suffered in such economic crisis even before Covid-19 pandemic. It was significantly reducing its GDP in last five to six years ruled by BJP government. Its touched at 23.9 in minus GDP growth in 2020 where their target was to achieve double digit. 5 trillion economies were the vision till 2021 and become the Vishwa Guru (World Leader) by Make in India and many more plans.  Expert says, political wrong decisions makes direct impact on economy and leads to today’s crisis.

When British came to India for trade and occupied Indian continent and ruled over it by divide sect, community, language & Religion. They create hatred among various group in India and take taxes to save one from another. This is how current government playing the innocent people of India. NSA is a common IPC use to through someone behind the bar by government especially honest journalist and Muslim leaders, it’s very comment in current Indian situation. Government’s intention is to makes fight between Hindus & Muslims, take an example which was happened in Delhi last year.

Suddenly at evening 9 O’ Clock Mr. Prime Minister came live one TV and Declare 500 and 1000 rupees will no longer valid to use all India wide. It’s nothing but a pieces of paper, People can exchange those note in bank and this is how it has stopped and falling down the curve of economic growth.  People spend long time in front of ATM Booth and during this time people dies in waiting line. All small entrepreneur forced to slow down their business due to lack of Hard cash transaction.

Small Business dies for this taxation system; One nation one tax was the idea and it could lead the country more financial growth but result was not hopefully at all. Its makes profitable for larger companies on the other hand small business are trapped in GST and forced them to shut their business.

India came first on ranking of most corruption leading country in south Asia. This country’s major younger people are job less even after completing higher education because of Investment Non-friendly environment. Foreign investor afraid to invest here in India. Local goons are asking extortion money for any business by the support of political parties. Bribe is key important part to pass any government work even its followed each criteria. So result is No Investment = No Plant (Job Scope) = No job = No economic growth. And finally doctors and engineers are being a part of pakoda yojana rather than work in hospital or in any project.

Indian media has loos it credibility in Indian even worldwide. They become meme and joke in this time in international media. They make fun of them because of their reporting styles and fake information. Ground reporting has abolished except a very few channel and took that place a new technique called debate. They select a topic to blame opposition, call expert, and of course ruling and opposition spoke person to make it an interesting debate. Sometime its go beyond of imagination with attacking persons, using slang language, do unusual things and physical fighting on air.

Estimate says; Indian black money currently present in Swiss and other offshore banks is estimated to be ₹300 lakh crores or US$1.5 trillion. There are too many names come to the front who has done bank fraud who was close to government and currently settled in foreign. There are too many incidents can be taken as an example about bank scam. People save their money to a bank and later on find out that Bankruptcy.

In the conclusion, there are few things need to change to overcome from this historic crisis. Let’s wait and see how government take any imitative action and find the way out.